Skip to content
lizzieannesews sewing with scripture May 28, 2019 3 Minutes

After daily sustained effort, it looks like the weeds are finally losing the battle. I’m literally picking the weeds out of the stones, so I thought I could refer to my previous post about gardening and quilting.

Speaking of, I inched along and got this done: 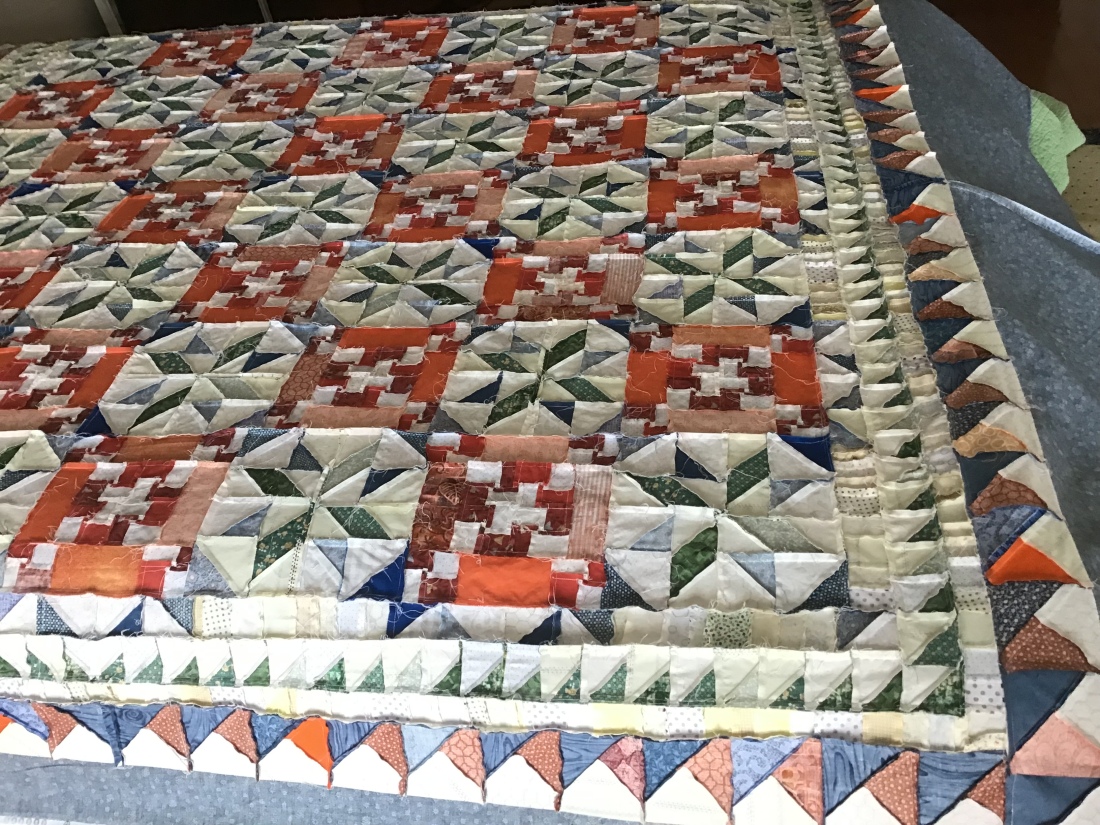 (View from the inside)

It has been a week since Mother’s Day, and as I pulled weeds, I found myself thinking about mothers, and mothering, and me.

Maybe it’s because I spent Mother’s Day alone. More accurately, it was spent with my husband, who made me the mother of four wonderful grown adult children. Because our dog was convalescing from surgery, we had to stay home. The one offspring that wanted to come over chose to stay home with her dog instead. But the other two within driving distance didn’t make the effort to drop in with a card or a hug. So it was a very quiet day for us two old folks. I grew up in a large family and being alone was a treat during those years. But now that I can be alone, I find myself checking in with my feelings about it. I can only surmise that my kids knew I’d be fine without them gathered around me on Mother’s Day. And I was.

I was born of Depression-era parents. They grew up with the facts of ration cards, iron lungs, and hunger. Yet they’d talk about their childhoods with fondness; recalling good times shared with extended family. I realize now that the want, the worry of big brothers fighting abroad in the war, the silver stars appearing in neighbor’s windows, basically, the fear – was swept under their childhood rugs. It was the only way to get on and grow up and get out. And you didn’t give your parents any guff. They had more than enough to deal with already. I think about my grandmother, mothering her thirteen children through all of this. What did she feel on Mother’s Day?

My childhood was spent in the midcentury modern years, and all dad and mom wanted was for me and my sibs to enjoy being kids. They didn’t indulge us, but they didn’t pressure us to grow up before our time. We were good kids, so we did our part by pursuing carefree childhoods, and didn’t give them much guff. When problems arose, my parents swept them under the rug and ignored them. Was that still the best strategy to use now that the Depression and WW2 were over? On Mother’s Day, did my mom think about her own childhood and compare it with the one she provided for us?

Then it was my turn. The fear of polio and poverty were updated to new threats to my precious children. My parents worried about the bad influences that may have lurked in our neighborhood and school. But I had the entire world, filled with both good and evil, lurking behind the keys of my kid’s computer keypads. Instead of being exposed to the one odd kid who knew how to make smoke bombs; my own children could have access to lots more dangerous information than that if left unsupervised on the internet.

So we did our best to restrain and control computer use. As we struggled to keep the monsters at bay on the darker side of the web, our own precious children would give us guff from their side. I didn’t like being put into this position at all.

I loved being a mother, but mothering was no fun at all.

During their turbulent teen years, I heard a great quote – “You can’t parent effectively from a place of fear”. I had an instant attitude adjustment. From that time, I chose to recall the promises of God and put them in front of my motherly worries and fears.

I think of the mother of Jesus. How did she manage to mother Jesus without worry and fear being her constant companions? She had the ultimate evil attacking her Son from the day He was born in that lowly manger. I can’t even imagine how she held up as the plan unfolded and revealed what would happen to Him in order to save the world from sin and death. I can only surmise that she knew that she was not alone.