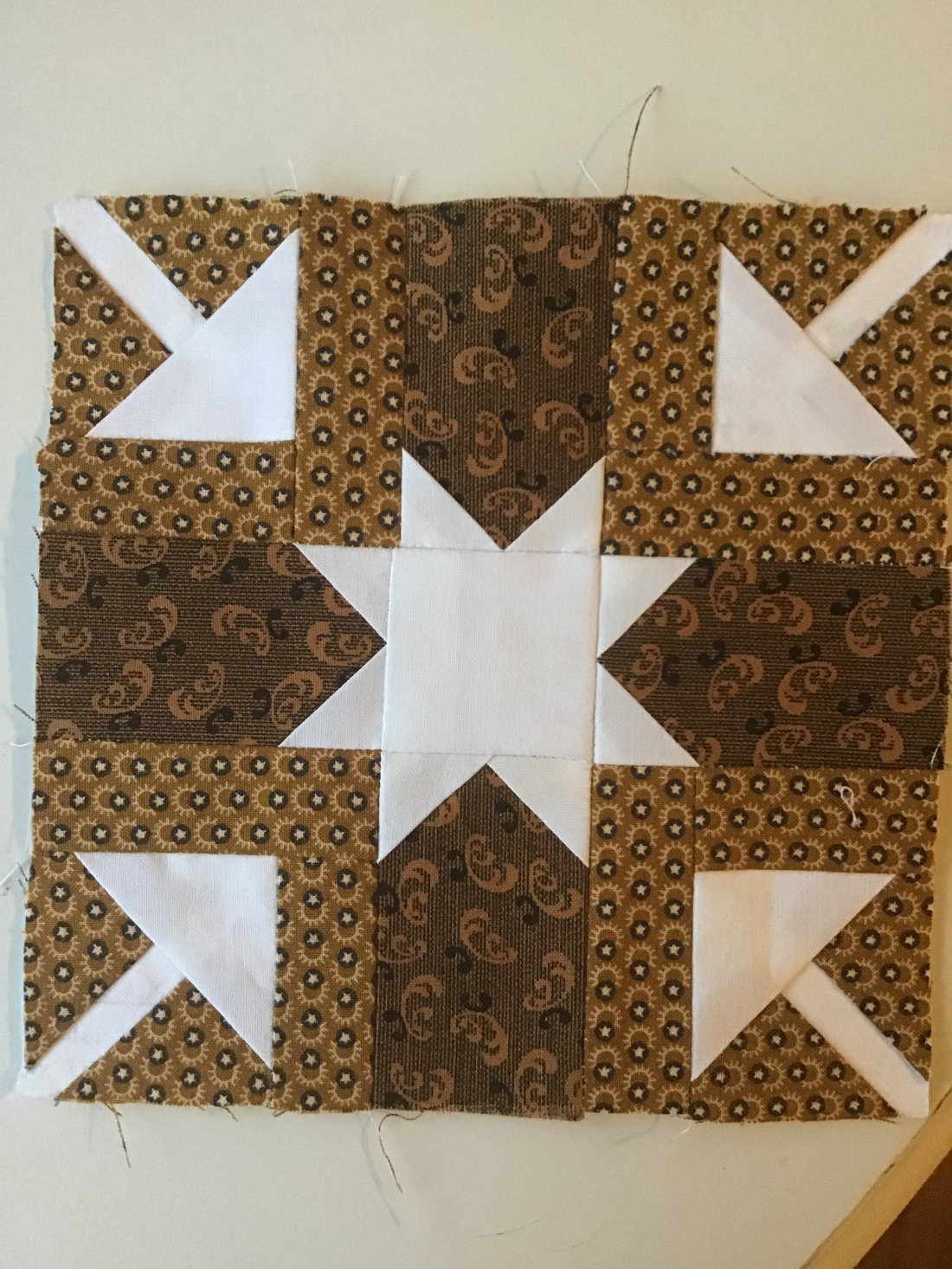 Sampler quilts are great because the blocks don’t repeat. There’s no chance of boredom with the Bible Sampler quilt because each new block brings not only a new design, but a new passage of scripture to think on while planning out the fabric choices. See the star pattern on the gold fabric? I decided to be intentional with the direction of each piece. Each star being a soldier, marching in a unit. Each unit moving outward in formation. I see now one unit is (accidentally) counter-marched. That’s my F Troop. But it’s okay because the whole block came out looking much more disorganized than I had envisioned anyways. Its busi-ness looks like it’s bordering on chaos with the marching stars and arrows pointing every which way.

. . . Which coincides perfectly with the Bible passage we are covering today. Clever segue into Exodus chapter 14: God will soon part the Red Sea to help the Israelites escape the pursuit of the Egyptian army. Being the considerate Father that He is, He lets Moses know ahead of time that it’s all going to go down according to plan. Also ahead of time, God confuses the Egyptians as they approach the dry land under the Red Sea. He causes the wheels of their chariots to swerve, and the hand-picked best of the best soldiers are careening about in chaos. And then we know how it ends for them.

Now that I consider this passage of scripture, I see that the Army Star block has order within the chaos. The arrows are all pointing to the Star in the middle of it all. The bright Morningstar. I choose to let this remind me that God is the eye of the storm, the calm presence in the midst of the battle. Everything is under control.

As a former teacher, my brain recalls songs and/or children’s books as I go about the day. The “Army” reference brought to mind this old song. Do you remember it? Do you remember the motions that went along with it?

I may never march in the infantry,

Ride in the cavalry

I may never fly over the enemy,

But I’m in the Lord’s army.

And the children’s book? Rosie’s Walk by Pat Hutchins:

A chicken, Rosie, decides to go for a stroll around the sunny farmyard. Unbeknownst to her, a sneaky fox is stalking right behind her and looking for his opportunity to pounce. Instead, he falls into one disaster after another as she calmly strolls along and eventually returns to her coop. Meanwhile, the fox is fleeing a swarm of angry bees so you know he won’t be pursuing Rosie ever again.

I think of our lives as His children playing out in a similar fashion. Ephesians 6:12 says “Our battle is not against flesh and blood, but against the rulers, against the authorities, against the powers of this dark world and against the spiritual forces of evil in the heavenly realms.”

The enemy is always lurking as we go about our business. We are oblivious to the battles God’s army is winning on our behalf as we are kept in His eye, the Eye of the Storm.